How Does DuskRise’s Far Edge Security Compare To SASE? 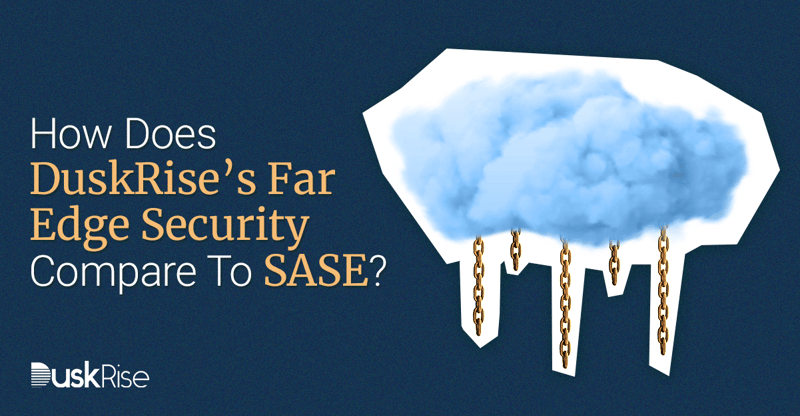 By deploying SASE, organizations can:

What Is DuskRise’s Far Edge Solution?

The boom of the flexible workplace approach has left off-premises networks entirely unprotected and increased the risk of IT security breaches for enterprises. From smart TVs to printers in employee homes,
the spectrum of devices targeted by hackers has expanded. Organizations that have adopted a distributed work model are currently facing a need to secure the new attack perimeter and gain visibility into the remote networks. DuskRise has addressed this need by creating a solution that extends corporate network security policies and controls to untrusted networks through the use of mobile hardware access points with edge computing capabilities. With a defense-in-depth approach, these access points add key security features to cover the new attack perimeter.

The features of the DuskRise network edge security platform include:

The DuskRise platform, Dogma, provides an additional layer of protection and seamlessly integrates into the existing security stack, helping enterprises worldwide minimize the risk of lateral movement attacks. It is located at the far edge of the user’s local network, before their internet gateway, unlike SASE solutions, located at the near edge, in regional data centers or cellular towers. Thanks to its location, Dogma provides stronger user privacy and network performance over a near edge solution. Rather than backhauling the traffic to the near edge and/or cloud, Dogma inspects it at the user’s local network, processing only anonymized portions of the data to reduce network trombone. 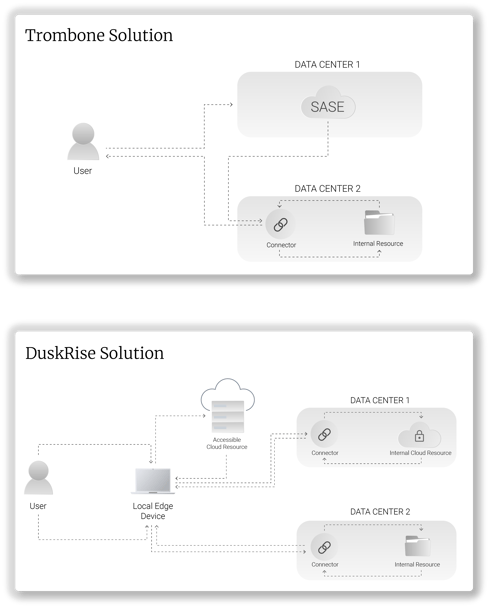 How Can Dogma Be Used Together With SASE?

When it comes to hardware devices and edge services, their capabilities are limited compared to the ones delivered by SASE. For instance, a SASE solution allows organizations to use a single infrastructure to provide CASB to both single and multiple users. However, by deploying Dogma at the far edge, security teams gain the ability to determine a subset of traffic to forward to the SASE solution, providing complete control of data and privacy.

For cases where DuskRise and SASE provide the same functionality, it is possible to deploy them independently and in tandem. Some solutions, such as SASE’s ZTNA, might rely on an already existing infrastructure that can be leveraged to reduce the operational overhead by combining Dogma and a pre-existing ZTNA solution. In this case, Dogma will amplify the level of security for non-ZTNA resources and improve privacy and productivity.

Yes, primarily to avoid backhauling a portion of an organization's traffic to the near edge or cloud, as this can lead to the following:

Loss of employee privacy: With DuskRise performing inspection at the far edge, employee traffic is no longer backhauled to the cloud, which prevents the possibility of it being intercepted along the way or retained by cloud inspection services.

Reduction in employee productivity: Backhauling traffic to the cloud or the near edge reduces productivity, either due to increased latency or a reduction in the throughput of Internet connections. Unlike SASE, Dogma does not have this limitation and allows traffic to go directly to its intended destination with an inline inspection to ensure that latency and throughput are not impacted.

Schedule a demo today to see how it works.

I consider myself somewhat of a digital nomad. I say somewhat, because I do have children, a dog, a home, the typical re...

How Does DuskRise’s Far Edge Security Compare To VPN?

How Does DuskRise’s Far Edge Security Compare To VPN?

How Does DuskRise’s Far Edge Security Compare To EDR?

How Does DuskRise’s Far Edge Security Compare To EDR?